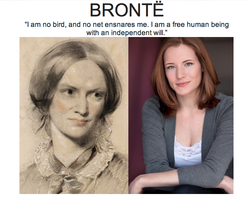 Lizzie Mackintosh is a graduate of  the Acting School at Montclair University in New Jersey. Her appearances include Portia in Julius Caesar, Rosalind in  As You Like it. Arkadina in the Seagull and Rose in the Grapes of Wrath. Brontë will be Lizzie’s first solo play.
Ultan Hodgers has directed Dancing at Lughnasa, The Plough and the Stars, And Then There Was None, Great Expectations and Proof.
William Luce is an American writer noted for his one person plays portraying real characters including Emily Dickinson, Zelda Fitzgerald, Lillian Hellman and John Barrymore.

Tuesday 1st May at 8pm 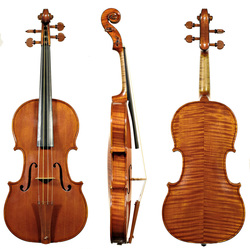 Aisling Manning, who is originally from Ravensdale, lives in London, has a Master's Degree from the Royal Academy of Music, and works with English National Opera, BBC Philharmonic Orchestra, Camerata Ireland and the RTE Concert Orchestra.

Julie Anne Manning (Aisling's twin) has a B.Mus. Honours Degree and Postgraduate Degree with Distinction from the Royal Academy of Music and is a member of the Halle Orchestra.

Deirdre Brenner (their cousin from Massachusetts) has a Master's Degrees from both the Royal Academy of Music in London and the Vienna Conservatory. She lives in Vienna and has played all over the world - I have lost count of how many countries but I think it is five continents.

Máire Carroll
Chopin – Piano Sonata No. 3
Máire Carroll, one of John O’Conor’s pupils, played at Anaverna as part of her preparation for the Dublin International Piano Competition which takes place in May.
Last year Máire was on the William Finlay Programme for Gifted Young Pianists. She has already won a number of competitions, played at the Aspen Festival in Colorado and also performed on the violin with the RIAM Chamber Orchestra in Shanghai. This week she was awarded the RDS Music Bursary which I gather is one of the biggest in Europe. 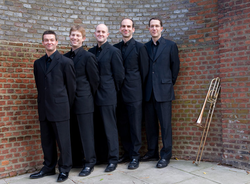 Onyx Brass, a world-class British quintet played at Anaverna. Programme included works by Bach, Shostakovich and Copland. Their concert was part of the Music Network tour.  It was a great evening and Thomas provided another delcious supper
http://www.onyxbrass.co.uk 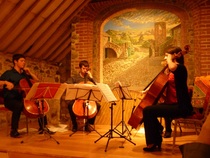 The Herbert Cello Quartet  (Aoife Dennedy, Ben Cashell, Peggy Nolan and Paul Grennan) played at Anaverna on Friday 30th March at 8pm. The programme included music by Mozart, Rossini, Scott Joplin, Arvo Part and the world premier of a suite composed for the quartet by Michael Doherty. The four cellists all studied at the Royal Northern College of Music in Manchester having previously met at the Royal Irish Academy of Music in Dublin. They are embarking on their first tour of Ireland with funding from the Music Networks Performance and Touring Award.